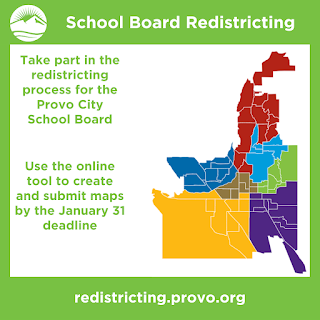 The State of Utah recently completed its decennial redistricting of federal and state legislative areas using data from the 2020 US Census. Utah County has now provided precinct data to Provo City GIS staff who have added population data to each precinct and have updated the web application to be used to allow the public to create district maps and submit them.
The number of precincts in Provo City has grown from 42 to 59 precincts. Since Provo City and the Provo City School District share the same boundaries, the Provo City Council is responsible (per Utah State Code) for setting both the City Council and School Board districts.
The City Council is still considering options regarding the number of Council districts, so the map exercise for those districts will be postponed. The current arrangement is five district representatives and two at-large (citywide) representatives. One option being considered is to eliminate the at-large positions and have seven smaller districts. This discussion does not apply to the School Board districts as they are prohibited from having at-large members.
To participate in the mapping exercise for the Provo City School Board redistricting, visit redistricting.provo.org. You will be able to change which precincts are in the seven different districts. Keep in mind that the precincts were created based on the number of registered voters, but that districts are based on population. Utah State Code requires that the districts be compact, contiguous, and substantially equal in population. There is a population box on the right of the map that lets you see if the populations are balanced enough between districts. The tool will not let you submit a map that doesn't meet the population requirements. You also will not be able to submit a map that duplicates an already submitted map. 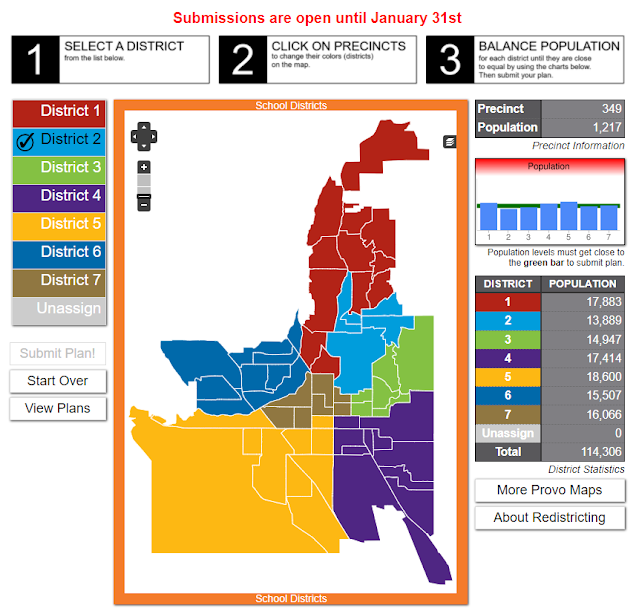 Map submissions will be taken through January 31, 2022. The City Council will then select qualifying maps that will be shown on Open City Hall for the public to comment on. The Council will need to adopt the new School Board districts at the February 15 Council meeting so they can be used for upcoming School Board elections.

Email ThisBlogThis!Share to TwitterShare to FacebookShare to Pinterest
Labels: redistricting