Citizens Agenda for Meetings on January 18, 2022 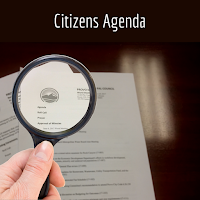