As 2021 comes to an end, Councilors Dave Sewell and Dave Harding are completing their service on the Provo City Council. We asked them to reflect on their experiences serving Provo City. 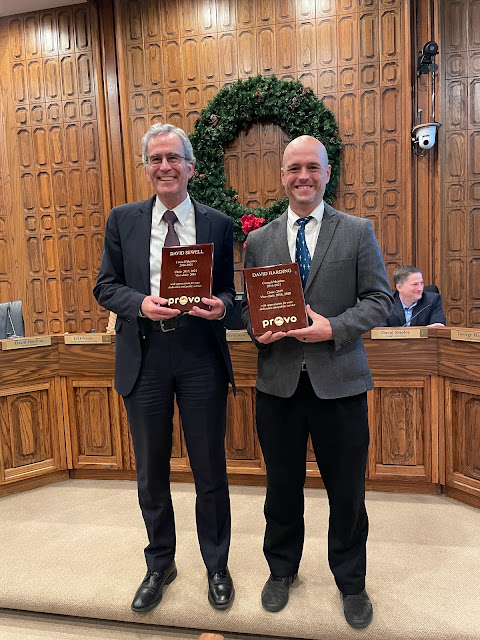 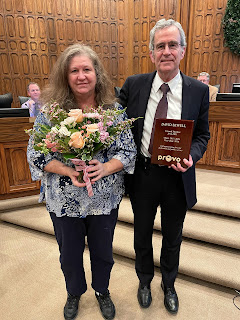 I first became interested in Council service while serving as a Neighborhood Vice Chair. I noticed that people care a lot about what happens in their neighborhood and that local government decisions often affect people’s lives more intimately than decisions at the state or national level. Some neighbors, including a former Mayor of Provo, encouraged me to run for City Council. It was a hard decision for me because I had never contemplated running for office before and didn’t know what it would be like. While on a family vacation just before the filing deadline, I made the final decision to run while trying to decide whether to ride a tall roller coaster ride my daughter had invited me to go on with her. I realized that there was no way to know what that roller coaster ride would be like without trying it. I decided in that moment to go on the ride with my daughter and to give running for Council a try.
As I reflect on my Council service these past eight years, one of the things that strikes me is how important effective relationships are. Legislators take action as a body and have no individual power or authority. Therefore, all legislative accomplishments are shared, cooperative accomplishments. I have enjoyed working with my Council colleagues very much. The thing I am perhaps most proud of is that, for the most part, we have learned to work together respectfully, including disagreeing on important issues without being disagreeable.
I started with an understanding of the importance of the separation of powers between the executive and legislative branches and the checks and balances that go along with that. What I learned though, is that it is extremely important to develop a collaborative and effective relationship between the branches. Neither branch can accomplish much without cooperation from the other branch. I am proud that we, meaning my Council colleagues and the Mayor and executive branch team, have been able to develop such effective relationships of trust and cooperation.
Some issues that I have made contributions toward improving include zoning and parking enforcement, improving the development approval process, digital sign regulation, Council rules and procedures and supporting our police and fire departments. Regarding neighborhood issues, I have tried to look not only at how an issue affects the city as a whole but also to consider the perspective of those who live in the neighborhood who understand the issue the best and are most impacted by it.
On a personal note, I am proudest of my efforts to consistently communicate with constituents through my newsletter and to listen to and try to understand constituent concerns. Voting on tough issues as a Council member means that some residents will not be pleased with each vote. I always felt better on those tough votes knowing that I had tried hard to listen and to understand the perspectives of the various stakeholders involved.
What I will miss the most are the working relationships with Council colleagues, Council staff and the Mayor and executive branch team. I particularly enjoyed the breakfast, lunch or other meetings where we (often just two of us) would dive in and share thoughts, ideas and feelings on how to tackle difficult issues. I will also miss the thoughtful communications from constituents sharing thoughts, feelings, concerns and ideas.
I am very grateful for the opportunity I have had to serve on the Council these past eight years. However, I am ready to pass the baton. 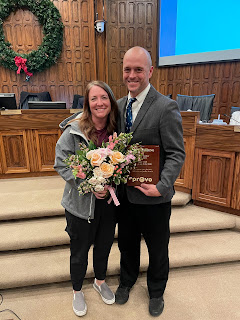 Before moving to Provo, I was married and going to grad school full time. Occasionally we'd get a flier or an invitation for some neighborhood or civic activity, but it was easy to ignore and justify to myself that we wouldn't be there long and that I would get involved once we moved to a more permanent home. Well, a week after moving to Provo we received a flier inviting us to a Dixon Neighborhood meeting, I didn't have my old excuse and it was time to walk the walk. I have found that there are opportunities all around to be involved in our community, but it does take effort on our part and we have to be willing to say "yes" once in a while.
Showing up to a neighborhood meeting meant being asked to lead a tree planting service project. Writing the school about a crosswalk concern lead to serving on the community council for the school. I never had any desire to serve on the City Council, but there was a sudden need due to the tragic death of Stephen Hales, our recently-elected representative in District 5. I certainly wasn't the most qualified person for the Council, but I had been involved and I felt a sense of duty to run so voters would have options on the ballot.
The past six years have been a blur. There are constantly multiple issues before the Council, always urgent and critical to some of our fellow residents. We always seem pressed for time, yet it also seems to take forever to get anything done. There are two items demanding attention for each item we clear from our docket. Perhaps with some time away and distance from my council service I'll be able to look back and appreciate what I was able to help accomplish, but from my current vantage point I only see the items left undone or unstarted: alcohol outlet density, west Provo planning, sustainable housing type mixes, zoning compliance efficacy, the General Plan rewrite, on-street parking management for Downtown and Joaquin Neighborhoods, and so on.
I have always tried to be transparent with the public -- to make it as easy as possible for people to be informed on the issues before the Council. I strove to always be informed on the issues we were deciding. Often the biggest impact isn't in the single vote a councilor has on items in Council Meetings, but the creative problem solving and leadership that takes place between the meetings that give shape to the Council Meetings.