2.  A discussion on the proposed language for the resolution supporting housing affordability in Utah County (18-070) A motion to remove “and fees” from line 40 of the draft resolution was approved 6:0, with Councilor Kay Van Buren excused.

3.  A discussion for a request to rezone portions of the East Bay Golf Course from Regional Shopping Center (SC3) and Planned Industrial Commercial (PIC) designations to Public Facilities (PF). East Bay Neighborhood. (PLRZ20180323) Presentation only. This item was already scheduled for the October 23, 2018 Council Meeting.

4.  A discussion on a request to amend the General Plan Map regarding land west of the I-15 Freeway and south of the Provo River. Lakewood, Sunset, Provo Bay and Fort Utah neighborhoods. (PLGPA20180225) Presentation only. This item was already scheduled for the October 23, 2018 Council Meeting.

1.  A discussion on a conservation easement for Rock Canyon (17-085) Presentation only.

2.  A discussion on a Council Intent Statement regarding the City Center location and the use of land in the downtown Provo area (18-093) A motion to approve the intent statement as amended in the meeting was approved 7:0.

3.  A discussion on recommendations regarding a budget committee (18-075) An amended motion to eliminate the budget subcommittee and resort to the Council as a committee of the whole regarding budget issues was approved 7:0.

Citizens Guide to Information on the Bond 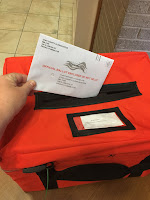 If you are registered to vote, you should have received your ballot in the mail by now. If you have not, please contact the Utah County Clerk's Office to check your voter registration status (801-851-8128 or http://www.utahcounty.gov/Dept/ClerkAud/Elections/). If you are not registered to vote, you can register online at vote.utah.gov or at the Utah County Clerk's Office. Voter registration deadline is Tuesday, October 30. Not sure how to vote by mail? Here's a great video that show you how. Mailing in your ballot requires a first class postage stamp, but you can deliver it in person to the customer service lobby at Provo's City Center Building (351 West Center Street) to save a stamp. 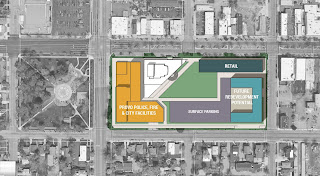 Provo City has established a website with details about the bond, links to background information and documents, and answers to frequently asked questions. VoteProvo.com also provides links to the voter information guide and informational videos. Additional information is added to the site as it becomes available.

The Council has opened an area on Open City Hall for people to submit questions about the bond. You can also read the answers to questions others have submitted.

The Council held a Town Hall on October 23 to discuss the proposed bond (see video below). It included a presentation on the background of the current facilities and what brought Provo City to where we are now with the bond on the ballot. The presentation also included a timeline for how the project would move forward if the bond passes and what would likely happen if the bond fails. Members of the community were invited to speak for and against the bond and the remaining time was given to a question and answer session.

We have linked to the individual questions/comments in case you want to go directly to that portion of the video:
1. Question about options considered about site selection
2. Question about how median home value was determined.
3. Question on some of the specific bond language.
4. Question about the tax structure and why property tax has to be used.
5. Question about how the costs of the proposed new facilities were determined.
6. Question about potential redevelopment on current site and whether any proceeds could be used to offset bond costs.
7. Statement supporting the bond.
8. Could the other sites considered be used without such extensive remodeling? What happens with cost overruns?
9. Mayor and others - additional responses to question about tax base and why property tax has to be used.
10. Architect explains more about how the cost estimates were prepared and amounts included to prevent cost overruns.

On display at the Town Hall were some timelines: 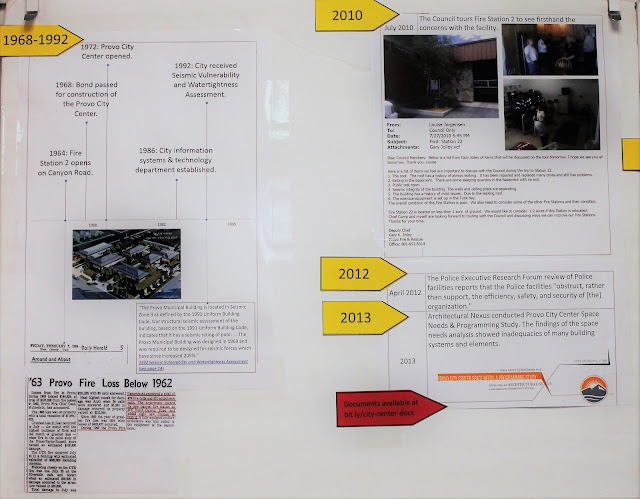 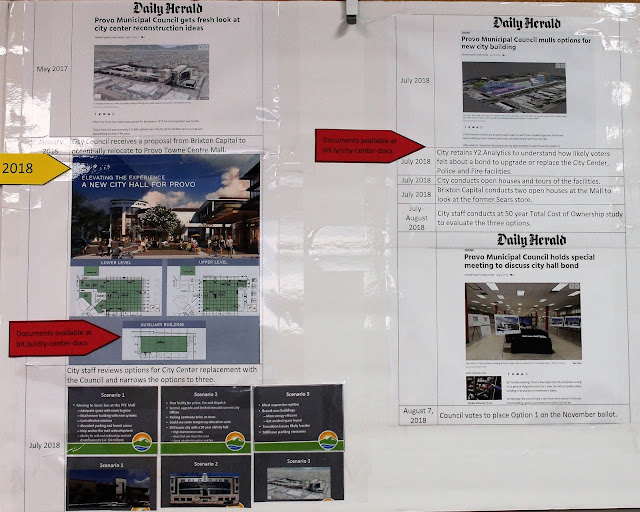 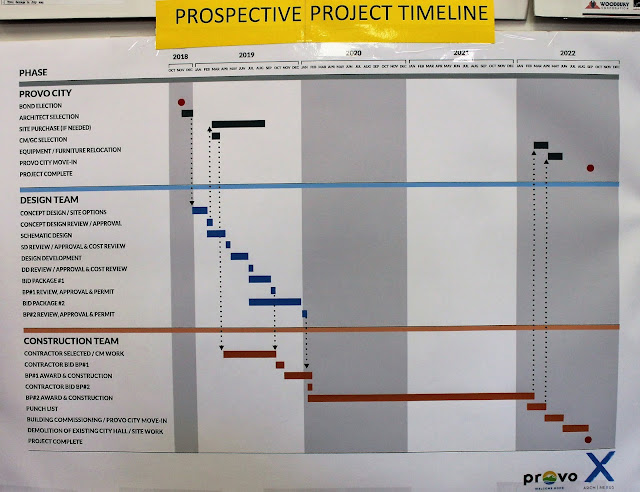 Email ThisBlogThis!Share to TwitterShare to FacebookShare to Pinterest
Labels: bond

Citizens Agenda for Meetings on October 23, 2018

Council meeting agendas are often difficult for people to navigate. Filled with jargon and legal requirements on how an item must be listed, it can be a challenge to determine what Council members are actually discussing or deciding on.
What follows is a staff interpretation of the agendas.
The official published agendas and supporting materials can be found here:  http://publicdocuments.provo.org/sirepub/meet.aspx

In August, the Municipal Council passed a resolution providing for a local special bond election for the purposes of “acquiring, constructing, and equipping in the downtown are a new police and fire headquarters, emergency dispatch center, and city hall.” As Provo residents have sought to understand the reasons for and parameters around the Provo Police, Fire, and City Facilities Bond, the Council and Mayor worked to answer questions particular to the location of the new facilities.

At the work meeting on October 9, Mayor Kaufusi and Council members discussed the options for locating new facilities downtown and issued this statement:

The Mayor and Municipal Council of Provo presently and firmly intend to build the new police, fire, and city building on the same block as the current city building, but at the west end of the block, along 500 West.

While we’re open to other locations in Provo’s downtown and will take a careful look at meaningful opportunities, only a truly great alternative would entice us away from our present plan.

We are excited for the opportunity to bring new businesses, attractions, and vitality to Center Street once the current city building is gone. We look forward to exploring these possibilities in the near future.
Read more »
No comments:

Citizens Agenda for Meetings on October 9, 2018


Council meeting agendas are often difficult for people to navigate. Filled with jargon and legal requirements on how an item must be listed, it can be a challenge to determine what Council members are actually discussing or deciding on.
What follows is a staff interpretation of the agendas.
The official published agendas and supporting materials can be found here:  http://publicdocuments.provo.org/sirepub/meet.aspx