Provo City has received a proposal that would involve building a medical school on a portion of the East Bay Golf Course. We previously asked for your comments in preparation for the Council meeting on December 5, 2017. At that meeting, Council members voted to hold a public hearing regarding the possibility of placing the portion of the golf course property on the surplus property list. This hearing will be at the January 9, 2018, Council meeting.
Since the original presentation on November 21 and the updates on December 5, Wasatch Educational, Provo Parks and Recreation, Provo City Administration, and East Bay Golf Course have refined the proposal to ensure a better balance between the development and the existing uses of the site. 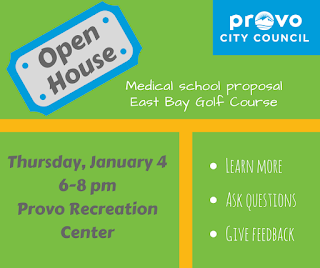 Information on this updated proposal can be found on Open City Hall as well as an opportunity to contribute your comments so they can be shared with Council members in preparation for the January 9 public hearing.
An Open House is being held at the Provo Recreation Center on Thursday, January 4, from 6-8 pm to allow the public to ask questions and learn more details of the proposal