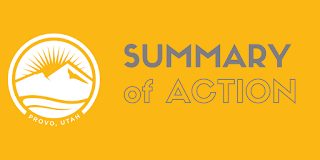 Business
1. A discussion on a conservation easement for Rock Canyon (17-085)
Presentation only.

2. A discussion on the Economic Development Department's efforts in workforce development, startups, and women, minority and underserved populations (17-087)
Presentation only.

4. A discussion on fee updates for Stormwater, Wastewater, Utility Transportation Fund, and the Fire Department (17-101)
Presentation only.

5. A discussion on the Stormwater Fee Schedule (17-102)
A motion to continue this discussion at the September 19, 2017 Work Meeting was approved 6:0, with Council member Kay Van Buren excused.

6. A presentation and discussion on Budgeting for Outcomes (17-103)
Presentation only.

8. A discussion on the Council's goals concerning minimum unit size requirements (17-111)
Discussion only.

9. A discussion on possible code changes regarding signage (17-110)
Discussion only. This item will be brought back for another discussion at the September 19, 2017 Work Meeting.

10. A discussion involving the Utah Municipal Power Agency (UMPA) and the Hunter Power Plant Assignment (17-115)
Presentation only. This item is scheduled for the September 19, 2017 Council Meeting.

11. A discussion on funding and appropriations related to an airport improvement project including issuance of sales tax revenue bonds, execution of a Tax Increment Pledge Agreement and development agreement  by the Redevelopment Agency, and a resolution appropriating $11,529,568 in the Airport Fund for infrastructure improvements (17-112, 17-113, 17-114)
Presentation only. This item was already scheduled for the August 29, 2017 Council Meeting.

12. LaVorn Sparks requests an Ordinance Amendment to Section 14.17.020 to add to Conditional Uses SLU #4603 Long-term Vehicle Storage including autos, trucks, and boats (on unimproved lots when non-contiguous to residential zones) within Public Facilities Zones. Citywide impact. (17-0012OA)
Presentation only. This item is scheduled for the September 19, 2017 Council Meeting.

Closed Meeting
13.
The Municipal Council or the Governing Board of the Redevelopment Agency will consider a motion to close the meeting for the purposes of holding a strategy session to discuss pending or reasonably imminent litigation, and/or to discuss the purchase, sale, exchange, or lease of real property, and/or the character, professional competence, or physical or mental health of an individual in conformance with § 52-4-204 and 52-4-205 et. seq., Utah Code.
A closed meeting was held.

The Council Meeting will be held in the Council Chambers at 5:45 PM, immediately following the meeting of the Board of Canvassers.

1. A resolution of the Provo City Municipal Council and Mayor sitting as The Board of Canvassers accepting the election returns and declaring and certifying the results of the municipal primary elections held in Provo, Utah on August 15, 2017. (17-105)
Approved 7:0, with Council member Kay Van Buren excused.
Adjournment

Presentations, Proclamations, and Awards
1. A presentation from the Provo Bicycle Committee of the Golden Spoke Award to the Police Department's Bike Patrol. Presentation only.
2. An introduction of the new Provo Bay Neighborhood Chair
Presentation only.

3. A resolution authorizing the issuance and sale of up to $6 million aggregate principal amount of sales tax revenue bonds for the purpose of financing certain airport infrastructure facilities; and related matters. (17-113)
Approved 6:0, with Council member Kay Van Buren excused.

Redevelopment Agency of Provo
5. A resolution authorizing the execution and delivery of a Tax Increment Pledge Agreement and a development agreement relating to the construction and financing of certain airport infrastructure facilities; and related matters. (17-114)
A motion to continue this item to the September 19, 2017 Council Meeting was approved 6:0, with Council member Kay Van Buren excused.

8. An ordinance granting Mobilitie a nonexclusive franchise in order for it to operate a telecommunications network in Provo City, Utah. (17-107)
Approved 6:0, with Council member Kay Van Buren excused.


The agendas may be found at the following site:
http://www.utah.gov/pmn/index.html

The agendas and materials may be found on the following websites:
http://publicdocuments.provo.org/sirepub/meet.aspx
http://provo.org/government/city-council/council-meetings