Summary of the June 20 Meetings

Parks and Recreation also presented a master plan for the Rock Canyon Trailhead area that will guide the short term and long term development of the trailhead and focuses on preservation, education, and recreation.

Affordable Housing
Robert Vernon, Executive Director of Provo City Housing Authority, gave a presentation on affordable housing. This topic often brings a lot of emotion and can deteriorate to trying to keep out "those people." Mr. Vernon explained that we need to have a better understanding of who is actually being impacted by the need for affordable housing. Area median income (AMI) for a family of four is $69,200. That sets a level for low income at $55,350, very low income at $34,600, and extremely low income at $24,600. One in four households in Utah County have incomes below 50% of the area median income (AMI). Life events like divorce or the death of a spouse can drop a family into a low income category. In Utah, the fair market rent for a two-bedroom apartment is $849. In order to afford this level of rent and utilities (without paying more than 30% of income on housing) a household must earn $2,829 monthly or $33,944 annually. That would take 90 work house per week at minimum wage. The typical two bedroom, two bathroom unit in new apartment projects is about $1,250. Mr. Vernon concluded with some solutions he proposed for the Council to consider.


Agenda  (Time stamps have been added on YouTube to the individual agenda items to help you find them in the video.)
Read more »
No comments:

Summary of the June 6 Meetings

Joint Meeting with Airport Board
The Airport Board met with the Council and discussed several items related to airport operations and development. The terminal layout portion of the airport master plan is 90% done. The Provo Airport is looking at several on-site development options. Looking ahead, the board has planned for an increase in customers and acknowledged the need for more space. It is expected that sometime in the future the airport will have over 100,000 passengers each year, which will bring in new types of funding from the federal government.This is difficult because of the ramp and the limited parking lot space for development. Noting the limited space, the board is looking for the best way to prepare for an increase usage of the Provo Airport. The Airport Board has expressed a need for a new taxi lane to accommodate growth. The current taxi lane is being redone this summer so that they can qualify for FAA funding of the new taxi lane.

How the Budget Works

The process for reviewing and approving the Provo City budget is outlined by Utah State Code. This infographic gives a visual outline of how this process works. 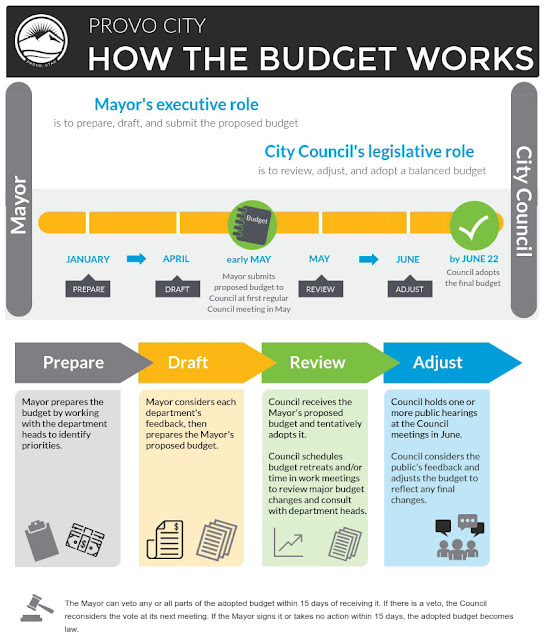