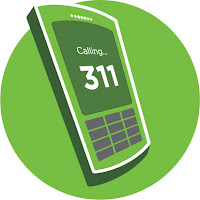 Have a question? Call 311! The employees there have to be knowledgeable about every department in the city, and stay current with events going on by reading the newspaper, Mayor's blog, news articles, City website, etc. I think most of their calls are related to utility billing, but I've definitely called them about other random things. A lot of the job seems to be anticipating what questions people are going to ask.

Not all cities have the luxury of a 311 line. Cross over into Orem and try calling 311...you'll see what I mean. Provo's 311 department started in March 2012 as a way to reduce non-emergency calls to 911. (Which, after, talking to the police department, seems to be a huge problem still). Having a central hub for the city seems to have streamlined a lot of issues with billing and such.
I don't think I have what it takes to run a call center--although I could get behind the massive amount of snacks it sounds like it takes to motivate employees, as well as their unofficial motto: "We like to give away stuff." As a class we went through what it takes to keep everything running, and hiring good employees seems to be the main thing. Just don't give them sass when you talk to them on the phone (in one picture I saw they were all holding kitchen knives -- the give-away of the day). That was a joke. (You can never clarify enough on Facebook). Actually, you can see the 311 employees at many city events, like Rooftop Concerts or as Santa's little elves during the holiday season. Whenever I've dealt with them they've been very nice.
The 311 department takes about 500 phone calls a day, as well as about 300 walk-ins, which really blew my mind. Apparently people like to have a physical location to go and talk about their problem. I think it is nice to put a face on the city, but I'm willing to bet these walk-ins skew older. I will call you and preferably text you about my city issue, but actually going somewhere to talk to someone? Yikes.
It sounds like a lot of customers (citizens) want problems fixed right away. Although that's not always feasible, the 311 department can track the response time of different departments to work orders, and thereby motivate them to do better. Call 311 with any questions, including ones about this post