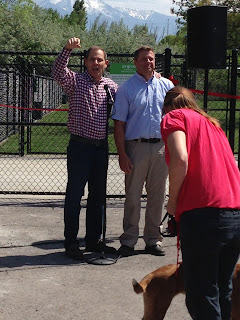 Can I just say that it was the show "Parks and Recreation" that inspired me to learn more about city government and get involved in the city? The world of city involvement was so foreign to me before I watched the show, and it really gave me the framework of how it functioned. Also super funny, of course.
For hour 1 of class last night we got to hear from the director of Parks and Recreation, Roger Thomas. Since I mentally gave him the best PowerPoint presentation award, I was sad to hear that he is retiring in December. The Rec Center was the foremost topic on our minds. The Rec Center was voted for overwhelmingly by citizens (we're so smart!), cost $39.5 million, and they stayed on budget! Director Thomas toured 50 different facilities to combine the best features of each, which has resulted in what he believes is the best rec center in the U.S., and it will hold that title for a few more years at least, until cities coming to check out our center model their centers after ours.

Other interesting things: -The Peaks Ice Arena is now run by Provo City and Utah County. A while back, the city put some indoor turf in for $68,000, and recouped their cost in 6 months by renting it out. Pretty impressive. Sounds like a good idea for a business here.
-There's a new little parking lot being built at Pioneer Village by the Rec Center. I know some people who have reservations about this, but I learned that it's for all the elderly people that volunteer there and need close parking; sounds like parking on 500 West is scaring them as they try to get out of their cars.
-Apparently there's an old shooting gallery underneath the outdoor Veterans' Pool. Can anyone confirm?
-Movies in the Park in August at Rock Canyon Park has been a big thing this past year. Mosquitoes have been a problem. The county runs mosquito program and they don't always get to them as fast as they would like.
-We talked about Winterfest, and how this year the New Year's Eve festivities will be held at the Rec Center rather than the Provo Mall. This will save on rental fees. Plus who doesn't love going to the Rec Center? I think it's a nice family-friendly nod to have earlier fireworks and later fireworks so those with young kids can head home from the party at an earlier hour.
-The Parks Division has a Parks and Rec Master Plan, which I've looked at before and is quite interesting.
-If you want to get buried in the Provo City Cemetery, it'll cost you about 1500 dollars, about half the cost of the private cemetery in town. There are 38,000 plots there and it's just about full, so the city is expanding and moving a road to gain another 13,000 plots. Reserve yours soon!
-The Parks Department is building a new park, Franklin Park, over by the Boulders. Someone brought up security, and I loved hearing that the neighbors were helping build the park and getting involved in the process--when people are invested in something they care about it and report problems.
-Did you know the city owns a shooting park up Provo Canyon? They run part of it, and the Provo Gun Club runs part of it, but it's all open to the public.
-Volunteers are important--they contributed 94,442 dollars worth of service hours last year.
-We briefly discussed some Visionary Projects: a Provo beach park on Utah Lake, an outdoor sports complex, a river water trail for kayaks--would love to see this one--, more dog parks, and a mountain bike skills park.
Then we talked about the RAP (Recreation, Arts, Parks) tax. It's a sales tax--1 cent for every 10 dollars spent in Provo, that will provide about 1 million a year to make some needed renovations and improvements for parks and trails in almost every neighborhood in the city. Sadly, my neighborhood is the only one in the city without a park, so nothing happening here. Provo River Trail will be a big one they will improve, they're also doing some other cool things like trying to bring children's films to Provo as part of the Sundance Film Festival. The tax expires after 10 years. I voted for it. I know the city battened the hatches due to the recession and a lot of things are overdue for a face lift.
Director Thomas ended by giving out some free day passes to the Rec Center. Great PowerPoint presentation and freebies at the end? This guy knows what's up and I hate losing competent people, even if it's to something well-deserved like retirement.

Email ThisBlogThis!Share to TwitterShare to FacebookShare to Pinterest
Labels: Parks and Recreation, Provology