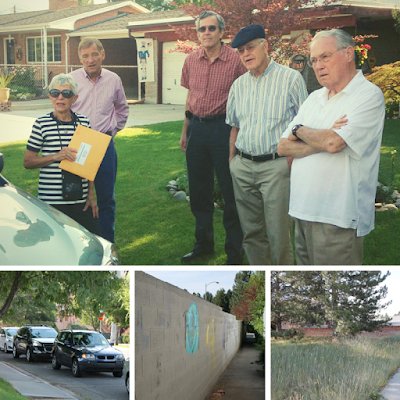 After identifying some areas that could use sidewalks or clearing of overgrown brush, Marian showed us a few areas that needed some extra help. One was a street feeding University Avenue that kept backing up with traffic since the lane for going straight was also the lane for turning right. A simple solution would be to combine the left turn and straight ahead traffic into one lane and leave the other lane for right turns. This would only require repainting the lane markings if it meets the approval of the engineers.

Another problem involved graffiti on a wall. This had been reported, but to an old phone number. Graffiti, potholes, and other city problems should be reported to Provo's Customer Service by calling 311 (inside Provo city limits), calling 801-852-6000, or by submitting the information online. Now that this graffiti has been reported through the proper channels, the Police Department will address it.

We enjoy getting to know each neighborhood a little better and encouraging them to find ways to make improvements. Sometimes all you need are a few neighbors willing to put in a few hours of work. Other times you may need some help or direction from Provo City. A call to 311 is a great place to start! Neighborhood Chairs can also work with the Council office when they need some support in connecting to the right people or departments. Neighborhoods can also apply for matching grants to make improvements or solve problems in their area by contacting Louise Jorgensen at 801-852-6120. Want to have a "Walk the Block" in your neighborhood? Louise is the one to call!