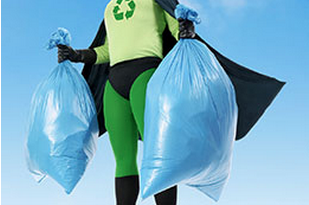 Council Members were pleased to receive public input on the future of Provo's curbside recycling program. The majority of people who responded indicated a preference for weekly pickups rather than biweekly and most preferred to keep the program as opt-out instead of mandatory. A representative from Republic Service, the City's current vendor for recycling, spoke to the Council and Mayor at this week's Work Meeting.

A request to spend up to $612,000 to purchase recycling containers was approved at the May 5 Council Meeting. This is the first step in transitioning to an in-house program. Provo City will buy 12,000 cans, enough for current customers plus spare containers for future and replacement needs.


David Decker, Public Works Director, explained that the program would continue to be opt-out (rather than mandatory) but would switch to a weekly pickup schedule. This would alleviate confusion over which week to put containers out on the street and would help those who are filling their cans quickly. Despite the service being doubled, the cost to customers should only be an additional $1 per month.

Details of the process of transitioning from Republic to the City-run program are not final yet. It will take time for Republic's containers to be switched out for the new ones. Ideally this will happen before winter ice and snow become a factor.