What would you do if your friend had trouble getting around the neighborhood? For Enoch Robertson, he reached out to his mom, Cori, and then to his neighborhood. Enoch's friend Brady uses a wheelchair and had trouble making his way on the sidewalks because there are so many cracks and holes. He ended up going up and down driveways and even into the streets to get where he wanted. Brady isn't the only one having a difficult time. There are others in wheelchairs as well as parents with strollers and they're thwarted by damaged sidewalks as well as areas where there are no sidewalks at all.


Cori and Enoch met with Louise Jorgensen in the Council Office about the possibility of getting a matching grant through the Neighborhood Program. Louise helped them through the process as they filled out the application and brought it to a Dixon Neighborhood meeting for support. The grant application was approved and the neighborhood went to work. A visit to the City Engineers office proved to be successful. Due to the number of handicapped people in the neighborhood, the city could move Dixon's sidewalk projects up on their priority list to take care of curb ramps.

Dixon Neighborhood set aside May 9, 2015, as their Day of Service. In addition to the sidewalk project they tackled some clean-up projects on several homes as well as Dixon Middle School. This included sweeping and weeding. This project had a cost of $1,000 and they matched it with volunteer hours valued at $1,668. It's a nice start and they plan to keep improving the neighborhood one sidewalk at a time. 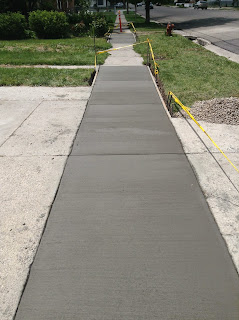 Hats off to Dixon for a job well done! 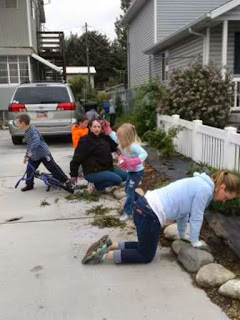