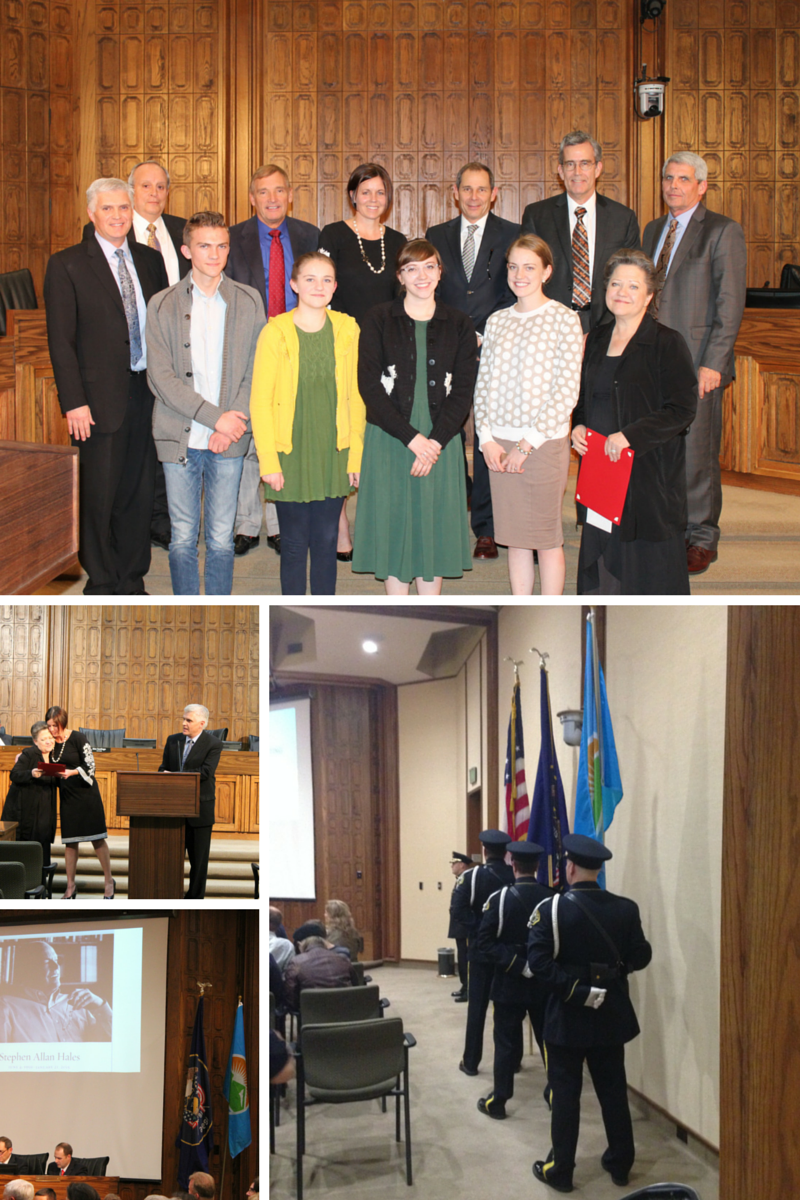 At the February 3, 2015, Council Meeting we had an opportunity to pay tribute to our friend and fellow Council Member, Stephen Hales, who passed away on January 21, 2015. One of his last actions on the City Council was to present the new Provo City flag design. That design was unanimously approved.

We were grateful to have the Hales family as well as a number of friends, neighbors, and constituents in attendance. Cindy Richards, former City Council Member and a close friend of the Hales family, offered the invocation.

As part of the tribute to Hales, the Provo City Honor Guard brought in and posted the flags at the Council Meeting, including the first new Provo City flag produced.  Gary Garrett and Kim Santiago then read the following:

Stephen Allan Hales was born on June 4, 1959, in Provo. He spent his childhood in Provo, then moved to Santaquin at the age of fourteen. After graduating with honors from Payson High School he served an LDS mission in Bolivia. Following his service he attended Brigham Young University and earned a BFA in graphic design, followed by an MA in art history. He married his sweetheart, Calli White, in 1986 and they eventually settled into their historic family home in Provo where they have been for over 25 years, raising their seven beautiful children.

Stephen’s commitment to Provo was shown in many ways. He built his successful graphic design and advertising business, Stephen Hales Creative, and was an adjunct professor at Brigham Young University for 30 years. He served various in various organizations, including positions in his church, on the Utah National Parks Council Executive Board, and with the Freedom Festival. He recently became the graphic design department head at Utah Valley University. In addition to Stephen’s recent position on the Municipal Council, he also served on the Provo Landmarks Commission for 16 years.

Council members and Council staff have expressed their love for Stephen and Calli and for their family members, several of whom are here.  By way of a tribute to Stephen, we share with you some of these thoughts and expressions:

The loss of Stephen Hales is a great loss to our community.  His love for our city and for the people who live here is evident as we consider the legacy he left. His influence and his contributions are manifest through his work on the Council and his many years of service on the Provo Landmarks Commission.  His influence will continue to have an impact on Provo’s direction and bright future.

We have truly been blessed to have known such a kind and thoughtful person. He was principle-driven and reflective in his decision-making.  Other words used to describe Stephen are gracious, soft-spoken, and genuinely sincere.  He was also compassionate, intelligent, creative, and filled with integrity. He was one of those rare people who lived his life with such integrity that he inspired trust immediately, so he was easy to be counted quickly as a friend.

We learned at his funeral that he was also a great husband, father, businessman, and religious leader, and he is a great example to us. His professional and community life were reflective of his private life, and he was true to himself and his strongly held beliefs.

Though he had many other obligations outside his Council service, he never hesitated to take time to meet with fellow council members or to give support when needed. He took the time necessary to understand an issue fully, and he was an advocate for all, including the underserved.

We are grateful for our association with Stephen and for the opportunity to have worked with him on our Council.  We are a better Council, a better community, and we are better people because of Stephen and his influence. We acknowledge his many contributions to our community, and we extend our wishes of peace and love to the Hales family.