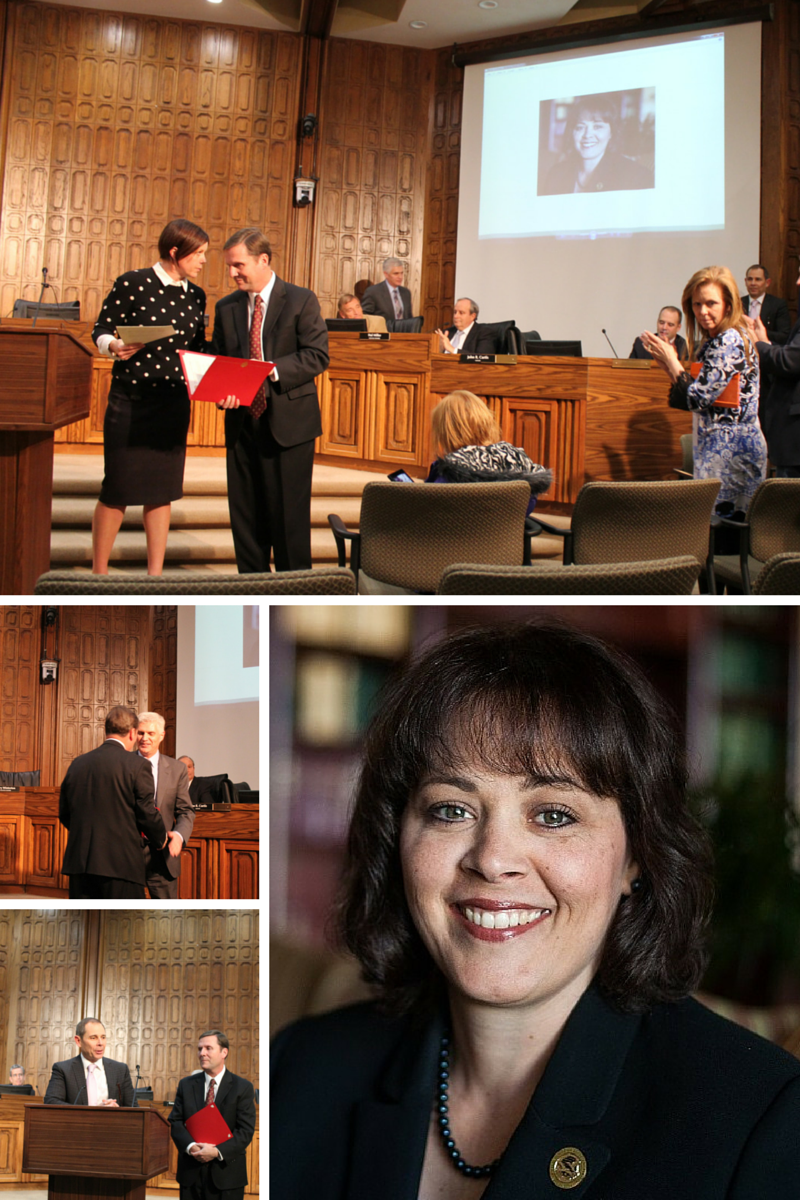 At the January 20, 2015, Provo City Council meeting, the Council offered the following tribute to
Becky Lockhart, a resident of Provo who recently passed away. Her husband Stan, a former Council Member, was in attendance.

Rebecca Dawn Lockhart, known to us as Becky, passed away at her Provo, Utah, home on January 17, 2015.  Born on Nov. 20, 1968, in Reno, Nevada, she received a Bachelor of Sciences Degree in Nursing from Brigham Young University, practicing for seven years as a Registered Nurse. Becky and her husband Stan raised their children - Hannah, Emily and Stephen - in Provo and often expressed great love for this city.

Stan is familiar to us as a former member of the Provo City Council, including serving as Council Chair. His service to Provo also includes time on the Planning Commission, Board of Adjustment, and the Provo Library Board. Together, the Lockarts have given much of themselves to the City of Provo.

Becky Lockhart was a member of the Utah House of Representatives, representing the state’s 64th District, which covers central and southeast Provo as well as north Springville. She was first elected to office in 1998 and served as Assistant Majority Whip in 2008. On November 4, 2010, she was chosen by her colleagues to be Speaker of the House – the first woman in Utah history to hold the top leadership position. Her service in the House ended just last month.

She was a tireless advocate for issues of concern to residents of Provo. As Representative Mia Love stated, “Becky Lockhart helped many of us find our voice to preserve life, liberty and pursuit of happiness.”

She worked hard on a number of issues important to cities in Utah, including:
Recently she served with Council Members Santiago and Winterton on the Council’s Budget Committee, adding her experienced perspective to the voices of other community leaders on that committee.


She encouraged women in Utah to be involved politically and to run for office, regardless of their party affiliation. Becky affirmed to women that, “Using your real voice might make you uncomfortable. It might make the people around you feel uncomfortable, but until we make it normal for women to be heard, until we are heard for our ideas and not viewed as tokens, that’s the price we’ll pay. I, for one, have been willing to pay that price.”

Governor Herbert echoed the sentiments of many when he said, “While she was first and foremost a wonderful wife and mother, she was also a remarkable role model, particularly to the untold numbers of women who were inspired by her example to be involved in public service. The state of Utah is a better place because of the service and sacrifice of ... Becky Lockhart.”

As wonderful as her contributions and achievements to the State of Utah and Provo City were, those that knew her treasured the contributions she made within her home, and to her friends, neighborhood, and church.

Becky spent her off-time quilting. Used as a means to remove her mind from politics, it was ultimately a means to bless others as well. She gave quilts to those in need and to others to say thank you for their service.

Becky’s dedication to her family leaves a lasting legacy that will continue on through each of them in their own lives and service. Rachel Benson, a Facebook friend, summed it up, “Life is precious. Becky always seemed to be making the most of hers.”

We offer our gratitude for Becky Lockhart’s years of service, countless contributions to the community, and for inspiring others to speak up and have a voice. To the Lockhart family we extend our hearts and our deepest sympathies.