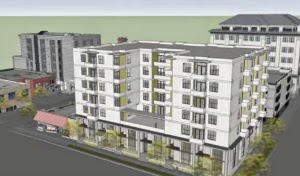 
Freeman said his company was interested in investing in Provo because of the leadership provided by the city, and the economic opportunities and growth about to take place in Utah County.


“We believe that Provo is on the brink of a major economic explosion,” Freeman said. “We have our finger on the pulse of a lot of companies that want to come into Utah County, and feel that Provo is really poised to take advantage of those opportunities.”


Seven main floor two-story brownstone apartments are planned, containing three to four bedroom units, and sixty-eight apartment buildings above those. Courtyard and rooftop areas were also planned, and Freeman said the apartments would be slightly larger than those on 63 East. Freeman said the buildings were designed to enable a modern historic blending, and provide for a more walkable environment.


Forge Companies is also the developer of the adjacent complex of mixed-use apartments at 63 east. Freeman said the success and interest in the apartments at that site spurred the company to expand their offerings, and indicated the close proximity of the facilities would allow them to closely manage economies of scale, and to share management.


“We’re fifty percent pre-leased at the apartments at 63 East during the construction phase,” Freeman said. “For anyone who knows about the business, that is a very difficult threshold to achieve, and indicates a substantial level of interest. We’re also one hundred percent pre-leased for retail at 63 East also, and we expect to see similar interest in this project.”


A challenge to the development will be to find adequate parking facilities to allow for an optimal 1.5 spaces per unit, which Freeman said would be necessary to market the development competitively. Freeman said adequate parking could be achieved in a variety of ways, including exercising an option to lease more spaces at the Wells Fargo parking garage, and including 20 surface parking stalls in front of the building along 100 East.


Freeman said a lot of the interest in this project has come as a result of excitement for the new urbanism movement among young people, and that this development would provide new opportunities for Provo to capitalize on that excitement.


“Provo can be the only true urban living experience in Utah County,” Freeman said. “With Salt Lake at one end, and Provo at the other as a bookend, this could be a great way to capture that urban living trend that’s so popular with the 25 to 30-year-old demographic.”


The project is pending a development application that will require planning commission approval.