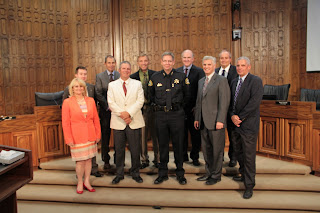 The Provo Council  would like to publicly express their gratitude for the care that Chief Rick Gregory has shown Provo, and for his service and leadership rendered as Chief.


Several Council Members offered their thoughts on the impact of Chief Gregory on the Provo Community.


Council member Gary Garrett said he was impressed with how Gregory responded to people on an individual level. “He’s been very willing to engage at a grassroots level with people to directly confront issues they have faced,” Garrett said.


Council member Rick Healey, who spent his career policing Provo as a law enforcement officer said Gregory was able to build relationships of trust. “Gregory’s ability to consolidate and create a working atmosphere for the police officers, and a confidence from the citizens has been wonderful,” Healey said.


Council Member Hal Miller offered his thoughts on how Chief Gregory impacted both the community, and the Provo Police Department. “As a candidate for City office I sought brief meetings with its administrative leaders so as to be clearer about their agenda and hopes.  Chief Gregory generously made time for me at his office, where much of the conversation dealt with his experience and advocacy of Community-oriented Policing,” Miller said. “I was taken by the concept and by his astute, approachable manner.  Though I am no observer of the inner workings of the department he has led, I have followed its accomplishments with interest and regard.  As the Chief departs for family-oriented pursuits, I view the Police Department's further maturation and sophistication during his watch as very much a reflection of his personal integrity, givenness to his profession, equanimity, and decency.  On behalf of my family, I thank him for the difference for good he has made in our community.” 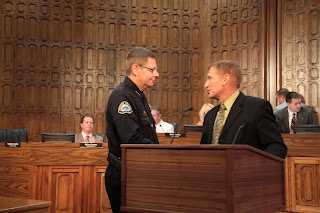