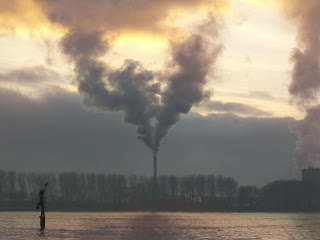 It had not occurred to me that I would clear my lungs while in Guangzhou, China.  I was there a few weeks ago at the invitation of the Clifford School and arrived directly from a winter in the asphyxiating murk of Utah Valley.  My youngest son and I had lived a year in Guangzhou 15 years earlier and, during our stay, had grown accustomed to the banishment of the sun.  The leaden skies rarely parted. They shrouded the southern-China megalopolis in sometimes-palpable particulates.  What I frequently coughed up or blew from my nose was a personal sample of the fallout from numberless polluters.  Nor was wheezing uncommon.
In those days there were no government-issued sanctions, no policing of Cantonese air quality.  Everyone moved in a human-made miasma, sensing its eye-rubbing foulness and looming toxicity but doing little more than pointing to the obvious.  Now, in my latest return, although the sun was still cloud-hidden, something had changed.  Within two days the nagging cough and nasal drip that were my regular companions in Utah Valley, especially in winter, left me.  Breathing came easier, and there was no ominous sense of dangerous air.  Granted, higher temperatures and humidity, together with lower altitude, must be considered.  But if I rely just on my intermittent visits to Guangzhou since living there, I think it reasonable to assume that the provincial government’s air-quality policy has been transformative and in relatively short order.

Returning to Provo brought more than resumption of cough and drip.  Before the visit to Guangzhou and in the thick of mid-winter inversion, I suggested to my Municipal Council mates that we inquire about municipal-legislative initiatives to promote healthy air. Of course, no municipality like ours can cleanse the air on its own.  Although we may tend to the salient polluters in our midst, we are ultimately dependent on our neighboring municipalities as well as on cooperative county, state, and federal entities for an effectual solution.  At each legislative and bureaucratic level there are well-meaning, informed, and forward-looking specialists striving to identify and piece together the collaborative components that will end dirty air in our time.  We wish them Godspeed in that endeavor.
When a promising, adequately-articulated solution path is in place, then it will be necessary to harness the adequate political will to see it through.  Here is where Provo can lead the way, as it has historically.  A robust combination of municipal-legislative and citizen initiatives (think Utah Valley Earth Forum, Utah Moms for Clean Air, and Utah Physicians for a Healthy Environment, for example) can go a long way  as vanguard.

Indeed, it may well be that, in time, the usual suspects—dirty energy, automobile exhausts, commercial kitchens, and flatulent livestock—will be supplanted by scrubbed-clean counterparts, and we elders all will breathe easier, as will our children and theirs in perpetuo.  For this to happen, there must be a sustained civic swell, a resolute multipartisan insistence on nothing less than affordable clean air in quantity and available to all.

Beautifully put, Hal. I hope we can make these improvements. Provo should lead the nation in environmentally-sound practices, much as my favorite Brazilian city, Curitiba, has done with the visionary leadership of Jaime Lerner. He transformed his town from being a typical,dirty Third World center of pollution and toxicity into a clean green miracle city. For Provo to do this, it wouldn't coast an arm and a leg. But to continue with the status quo will. In fact, it will cost us huge medical monies if we continue to ignore today's problems. Your reflections on China have been my experiences over the years there too. I also recall when my eyes would become teary upon disembarking from a flight from SLC to LA. Now it's the reverse. My eyes tear up and I start coughing when arriving back in Utah County. Please help lead out on this, along with your city council colleagues.